Windstalk  is a concept for a wind powered electricity generator that is also a public space.

Our project takes clues from the way the wind sways a field of wheat, or reeds in a marsh.

Our project consists of 1203 stalks, 55 meters high, anchored to the ground with concrete bases that range between 10 to 20 meters in diameter. The stalks are made of carbon fiber reinforced resin poles, 30 cm in diameter at the base and 5 cm at the top. The top 50 cm of the poles are lit up by an LED lamp that glows and dims depending on how much the poles are swaying in the wind. When there is no wind—when the poles are still—the lights go dark.

The bases that support the poles are laid along the site following a phyllotactic distribution, the kind we see in the center of a sunflower. The bases all touch each other, forming a kind of carpet, a kind of fabric.

The bases of the stalks, are all shaped like a elliptical vortice. When it rains, the rain water slides down the slopes of the bases to collect in the spaces between, concentrating scarce water. Here, plants can grow wild.

You can walk on the bases of the poles; you can traverse the whole site by walking from base to base. You can lean on the slopes, lie down, stay awhile and listen to the sound the wind makes as it rushes between the poles.

Within each hollow pole is a stack of piezoelectric ceramic discs. Between the ceramic disks are electrodes. Every other electrode is connected to each other by a cable that reaches from the top to the bottom of each pole. One cable connects the even electrodes, and another cable connects the odd ones. When the wind sways the poles, the stack of piezoelectric disks is forced into compression, thus generating a current through the electrodes. 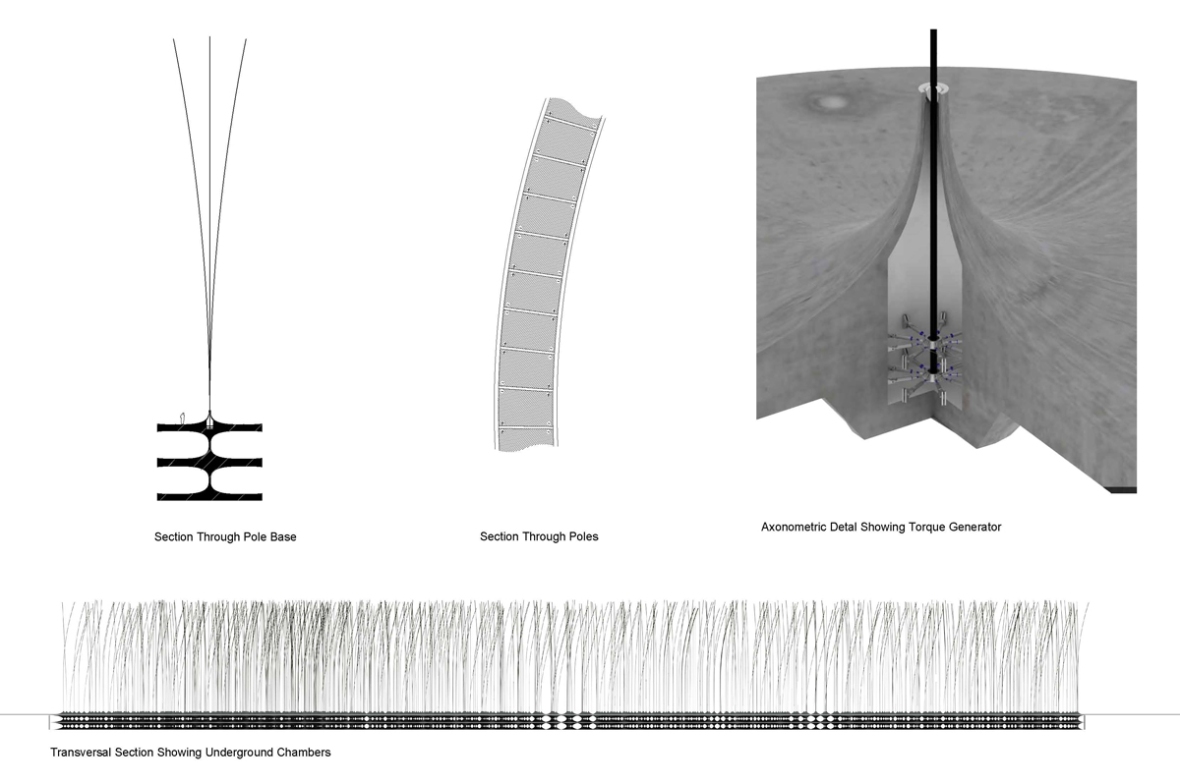 Within each concrete base is a hollow chamber that houses a torque generator.

The generator converts the kinetic energy of the swaying poles into electrical energy by way of an array of current generating shock absorbers, which convert energy produced by the forced movement of fluid through the shock absorbent cylinders.

The electricity that our project generates isn’t constant, it depends on the wind.

To compensate we make a kind of battery, a capacitor, a way to store energy:

Below the field of poles are two very large chambers, chambers as large as the whole site. The chambers are shaped like the bases of the poles but inverted, then inverted again, and again and once more.